It's another Monday, which means it's once again time to highlight some of the recent community submissions posted to the Math Craft corkboard. Additionally, I thought we'd take a look at the process of stellation and make some stellated polyhedra out of paper.

Rachel Mansur of Giveaway Tuesdays posted a video from animator Cyriak Harris, which zooms into fractal hands, where each fingertip also has a hand and fingers. A few more details can be found here, as well as some other really cool pictures of fractal hands.

Shamus Tobin posted a few images and quick description of a project he made—a beautiful mirrored, stellated octahedron that rotates. I'm really hoping that he might share a little more about how he made this amazing sculpture, because I'd love to have one of these on my desk! 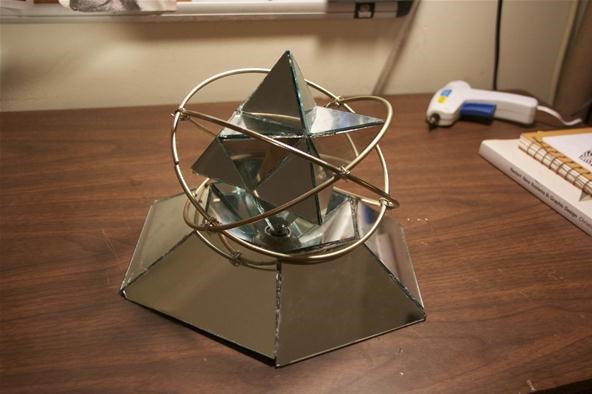 Shamus's post inspired me to take a closer look at the process of stellation. In two dimensions, stellation is a process that generates star figures from polygons. It's an alternative to the process that was used in last week's post on carving fractals and stars onto pumpkins. For stellation, you start with a polygon. In the picture below, I used a regular heptagon. 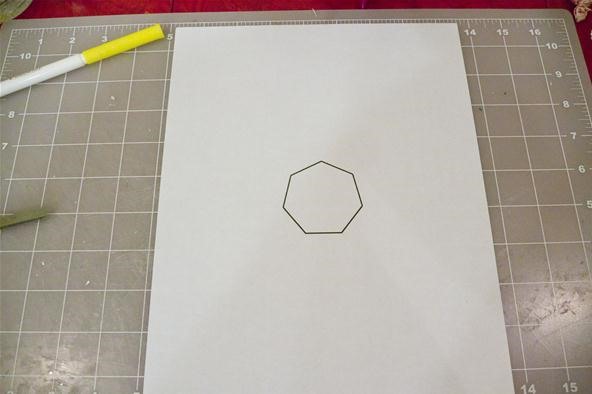 Now extend the sides until they intersect another extended side. This is one of the two stellations of the heptagon. 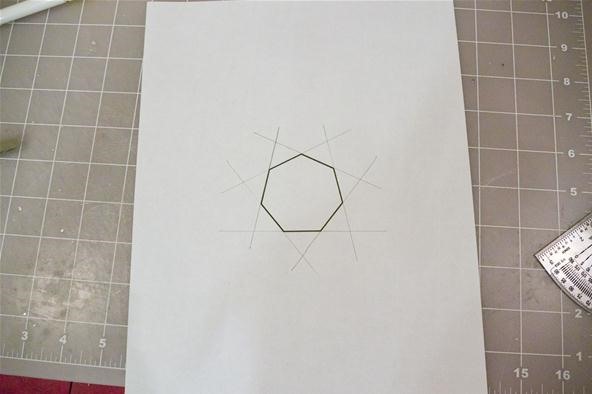 To find the second stellation, extend the sides until they again intersect another extended side. 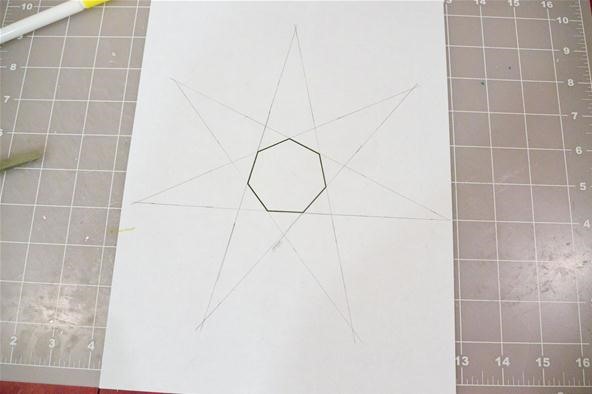 A similar process can be applied to three-dimensional figures. But instead of extending sides, you would extend faces. This would be a difficult process to do physically, unlike the two-dimensional case, but we can build these stellated polyhedra without going crazy.

Making the Stellated Octahedra from a Paper Net

I printed out the net for the Stella Cctangula, cut it out, and pre-folded all of the edges that the directions indicated on the print out. I used cardstock for strength, but ordinary paper would work just fine. 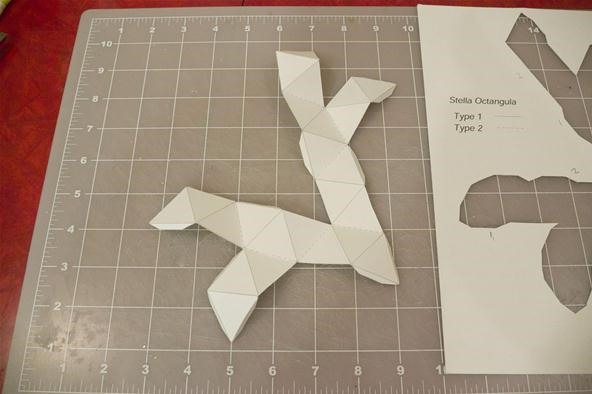 I folded the tabs back, put an even layer of glue on the net, then placed a sheet of aluminum foil on top of the net. I pressed down hard so that it would adhere strongly and be as smooth as I could possibly make it. 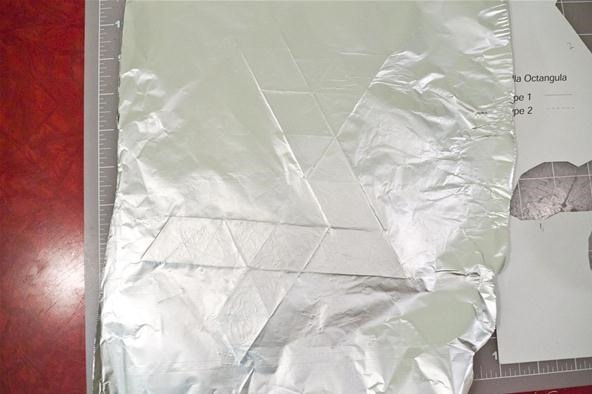 This shows the reverse side. Notice the taps bent back so that there wouldn't be any foil on these. Right after I took this picture, I used an X-Acto knife to cut out the foil. 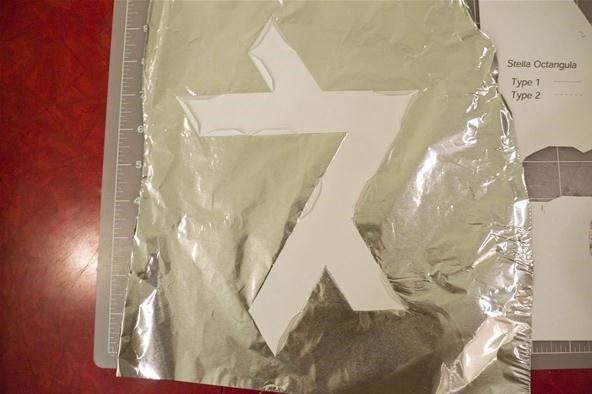 This shows the net after the excess foil has been cut. 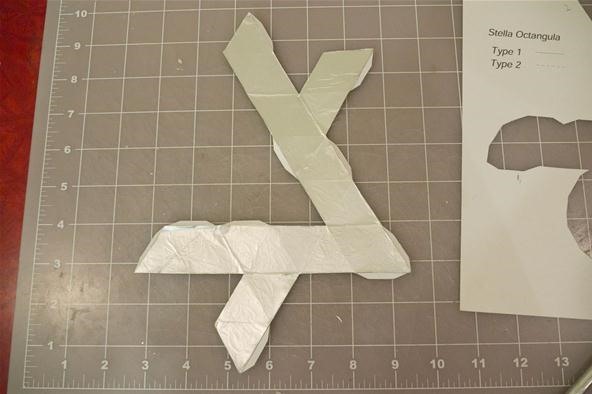 I folded all of the edges the correct direction again. 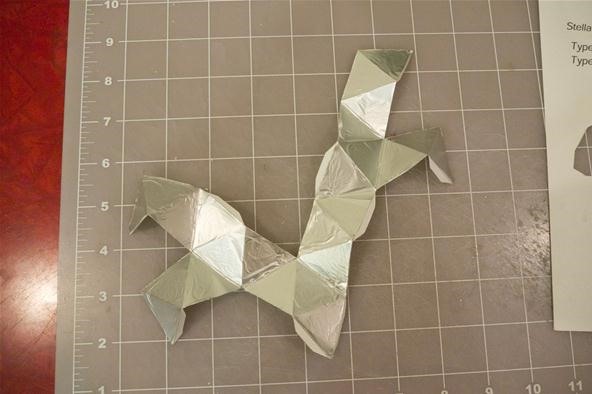 After gluing all of the tabs, the result should look like this. Shamus's mirrored version is much more impressive, but this is still a fun object… and it's shiny! 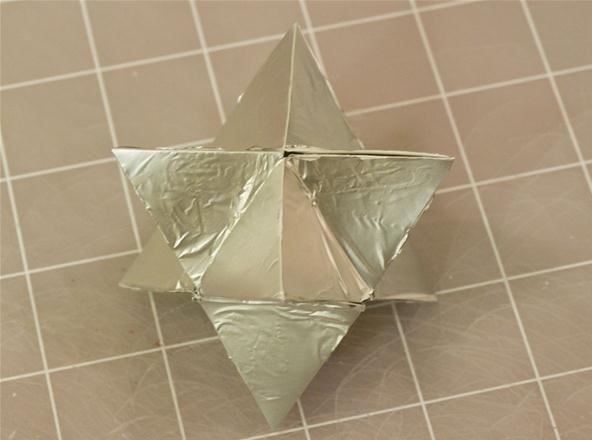 I took a yellow felt tip marker and colored it so you could see the two tetrahedra easier. It took a few coats, but now it looks pretty good and it doesn't wipe off. 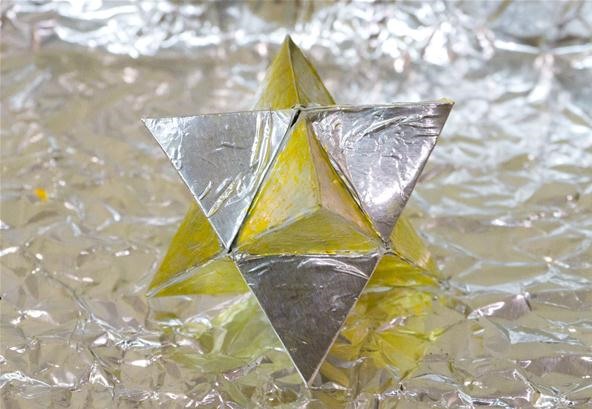 Feeling a bit like it was Christmas time, I made another and used some glitter glue to color it in the standard red and green. 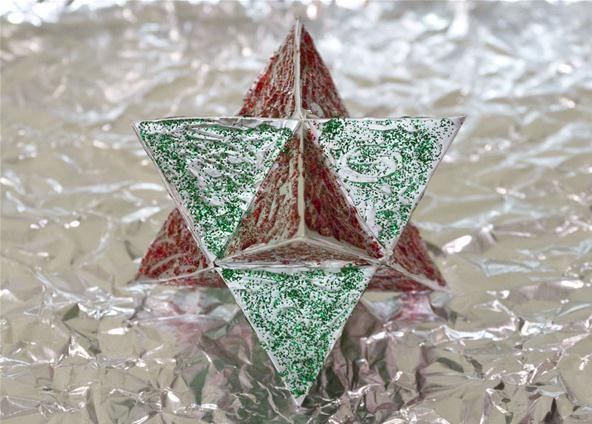 If you're motivated, you can also make more complicated stellated polyhedra using this method and the nets found on Gjis's site. The icosahedron has 58 stellations, many of which look quite amazing. Last night, I made the sixth stellation using a net found here. I used glue to add a layer of foiled origami paper to the top of some cardstock. 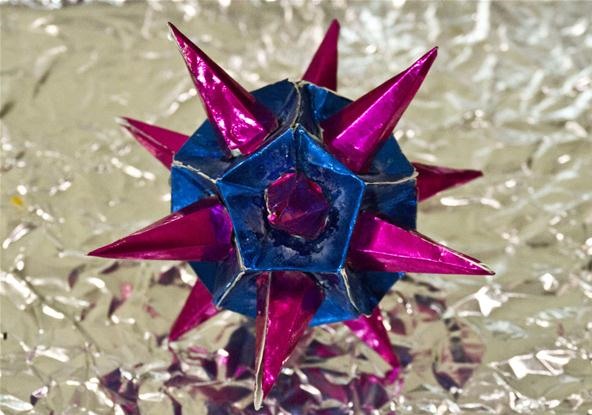 If you complete one of these stellated polyhedra or any previous Math Craft project, please share with us by using the corkboard. Maybe you just have something cool that you made or saw on the Web. You can share that, too.