It's Monday, time to highlight some of the community submissions posted to the Math Craft corkboard. One of these posts inspired me so much, I think it merits a closer look. Today, I present a "simple" method for making a golden spiral using just a straight edge, a compass, and a template, inspired by RJ Ellicock's golden ratio post.

We had two submissions this week where community members submitted photos of Math Craft projects that they completed.

Blixten used textures from Minecraft to create a compound of two cubes from paper, inspired by the previous Monday's post on making paper polyhedra.  He even includes a template so you can make your own. 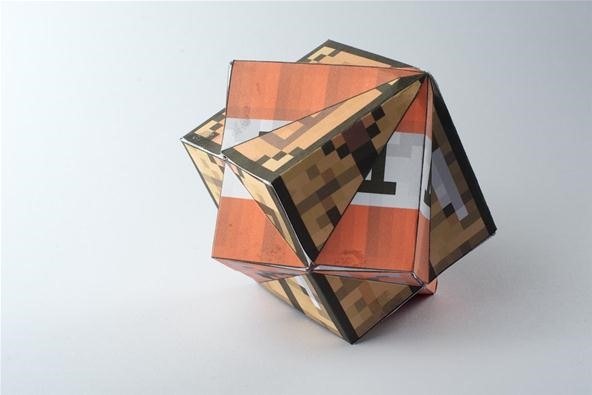 Thong Le built both a cube and an icosahedron out of playing cards following the instructions from Tuesday's post.  He then stacked them to form a small snowman figure, and even included a 3 card hat which looks great. 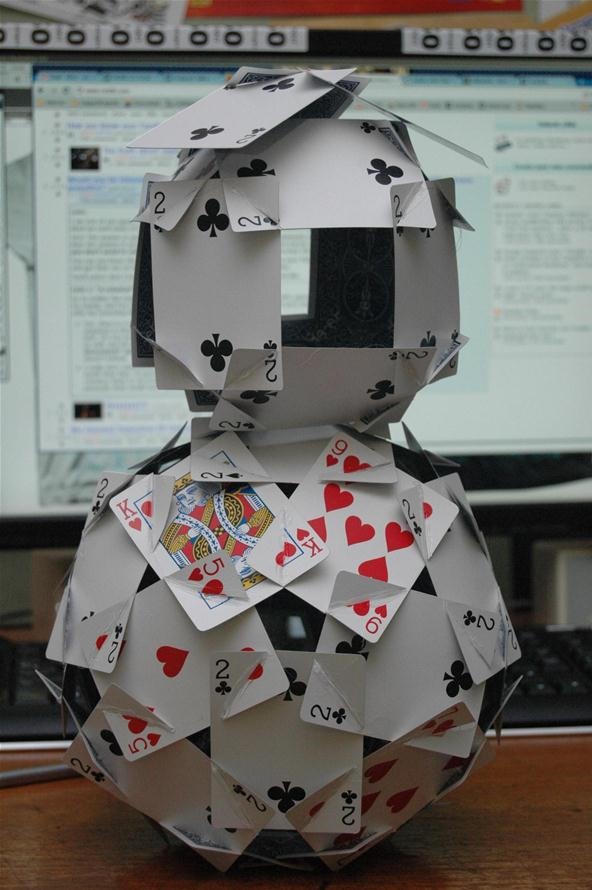 We also had a couple of posts featuring the creations of various mathematical artists.

Rachel Mansur of Giveaway Tuesdays posted up a video of an object based off a mobius strip by Torolf Sauermann.

Rachel also posted up the informational article "The Platonic Solids Get Trippy" which featured an architect's method for generating fractals from the platonic solids.  I'll post up one picture, but the entire article is worth checking out if you already haven't done so. 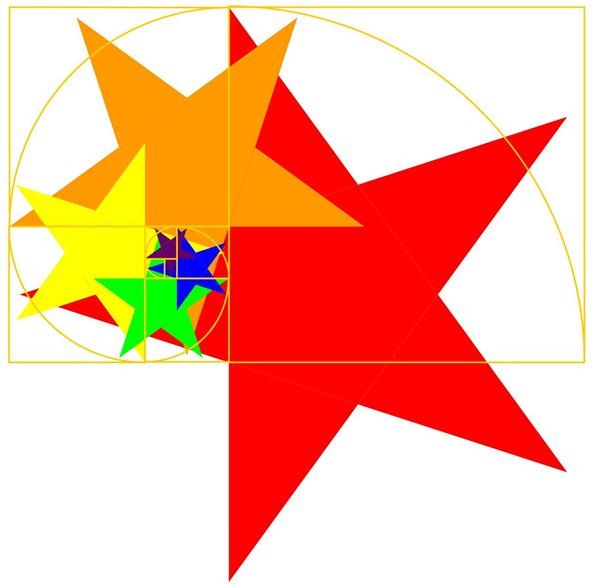 Project 1: Create an Infinite Series of Pentagons and Pentagrams

First download and print the template. You can print this at any scaling you like. "Fit to page" would work nicely.

Step 1 Create a Pentagram Inside the Pentagon 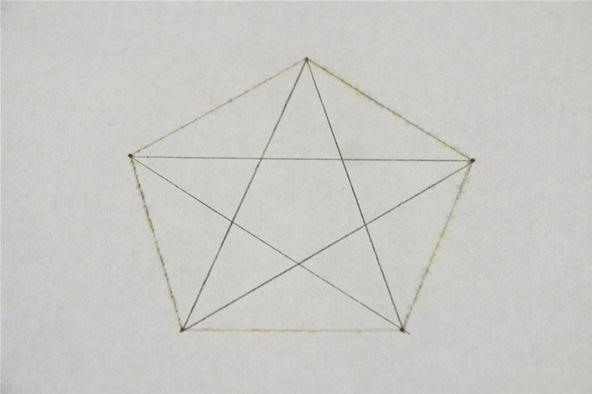 Step 2 Create Another Pentagram Inside the First

Now you can create another pentagram inside the pentagon formed in the middle of the pentagram you just made using your pencil and straight edge. You can repeat this process until it gets too small to do so again. You've created a very simple self-similar object, like a fractal. 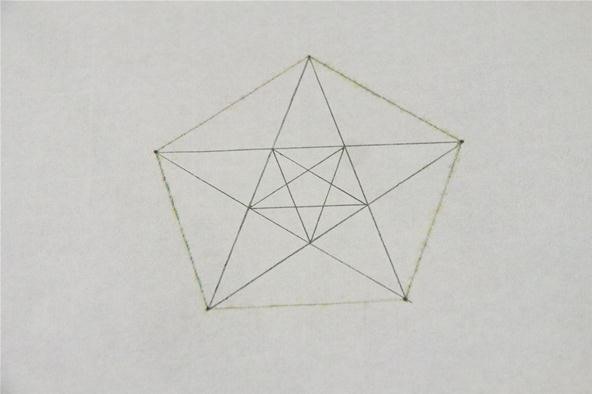 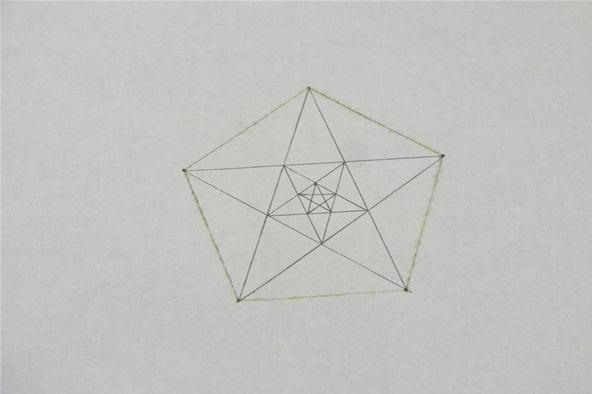 You can go further than this. There's plenty of room.

Step 3 Optional: Create a Pentagram and Pentagon Outside the Template

If you want to make the object bigger, you can extend all of the sides of the pentagon. These edges will intersect and once you erase the parts of the lines beyond the intersection point, you will have created a pentagram. This process is called stellation due to the fact that it produces a star. Once you have your star, you can connect the outer points to form another pentagon. 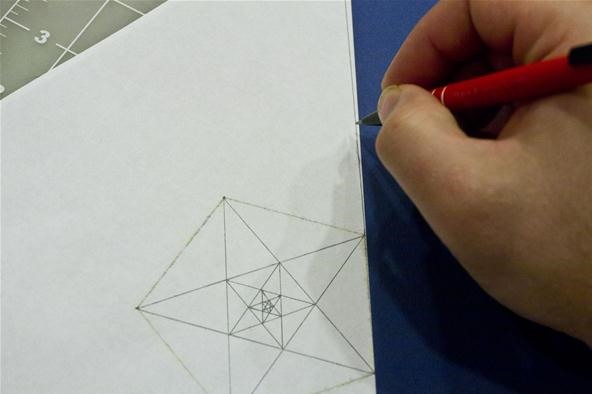 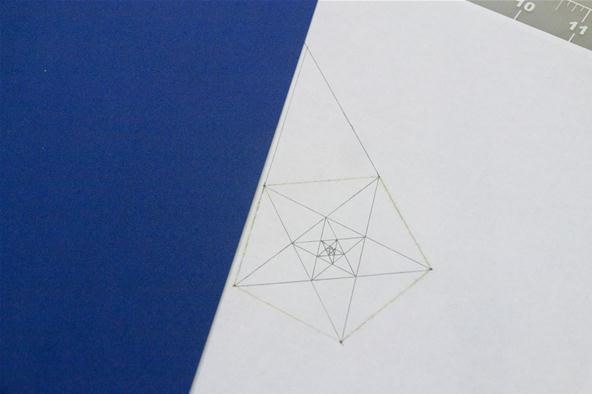 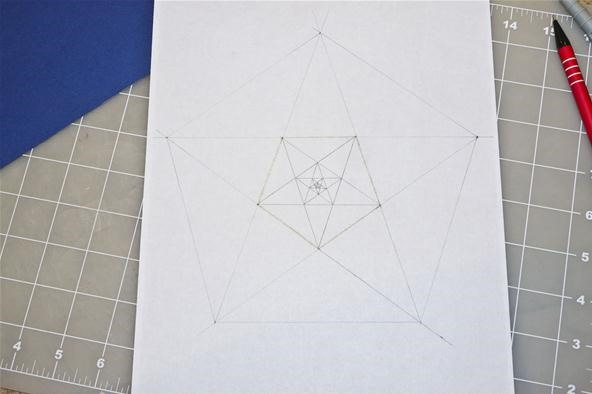 There are lots of ways that you could make this an interesting piece of art. I'm absolutely convinced you can do better than me.

The golden spiral will be created using pentagons, pentagrams, and triangles. First, download and print the template. You can print this at any scaling you like. "Fit to page" would work nicely.

Step 5 Follow Step 3 Above, Starting From the Original Template

To make the object bigger, you can should draw all of the sides of the pentagon. These edges will intersect and once you erase the parts of the lines beyond the intersection point, you will have created a pentagram. (Note: You do NOT want to have the detailed inner star here. It will get in the way.)

Step 6 Create the First Section of the Spiral

This first picture shows a diagram of where you are going to be placing the next few compass points to swing your arcs. 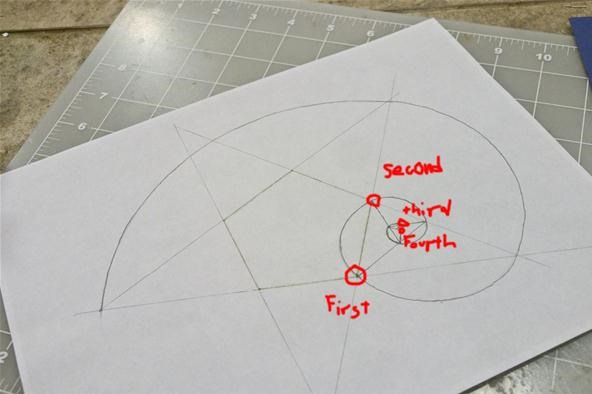 This one shows the first arc. 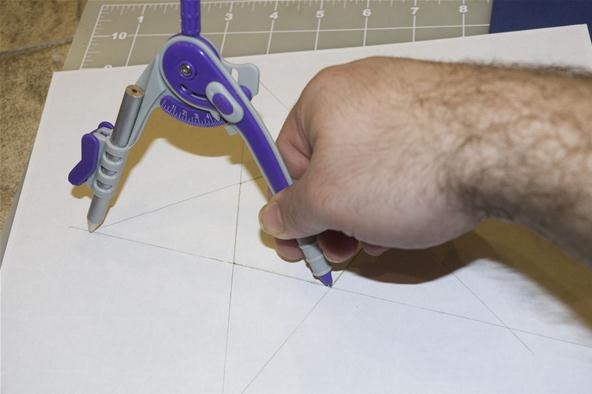 Step 7 Create the Next Section of the Spiral 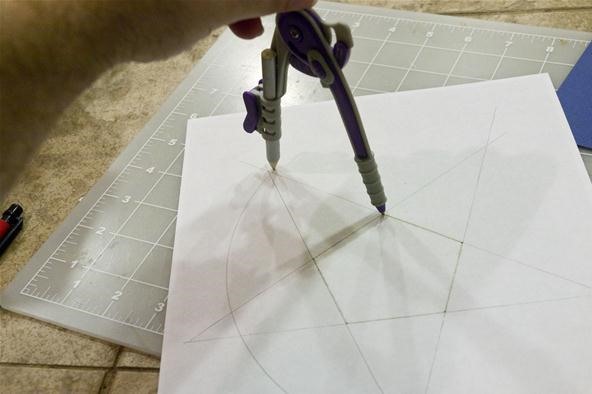 You will do this by bisecting the angle of one triangle formed by the pentagram. By eye, divide one of the angles of the triangle into two equal angles. Once you have done this, extend that side until it intersects another point of that triangle using a straight edge. 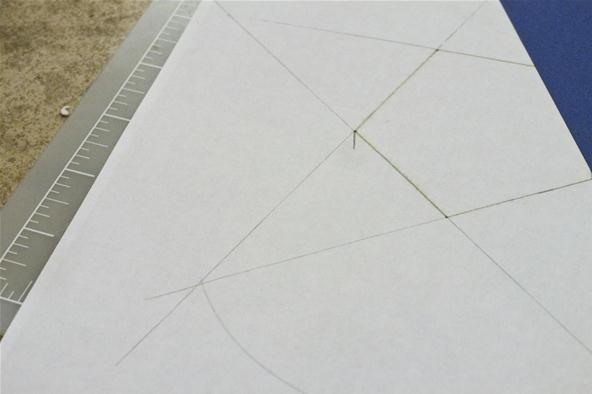 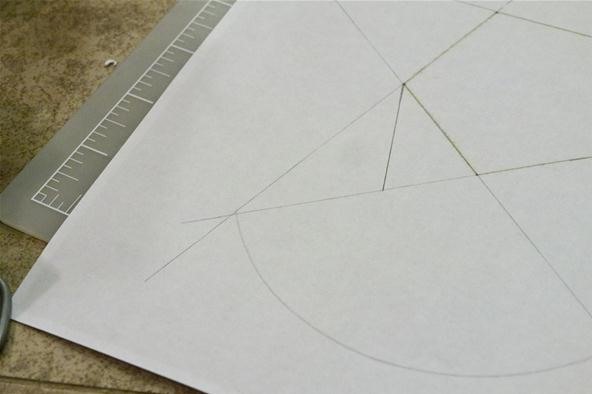 Set the point of the compass on the intersection point of the newly formed triangle and the old triangle. Set compass width so that it extends to the end of the last section of the spiral. Swing an arc to the next point on the big triangle. 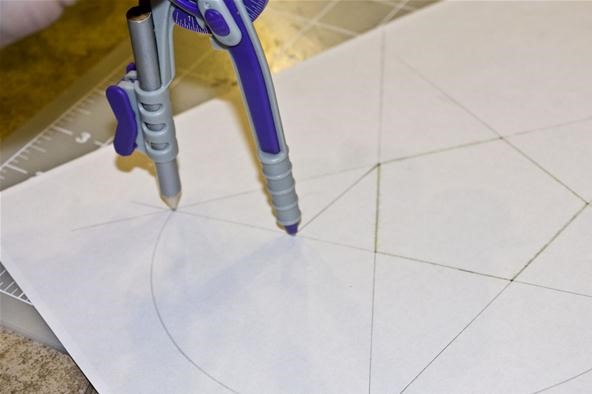 By eye, divide one of the angles of the triangle into two equal angles. Once you have done this, extend that side until it intersects another point of that triangle using a straight edge. 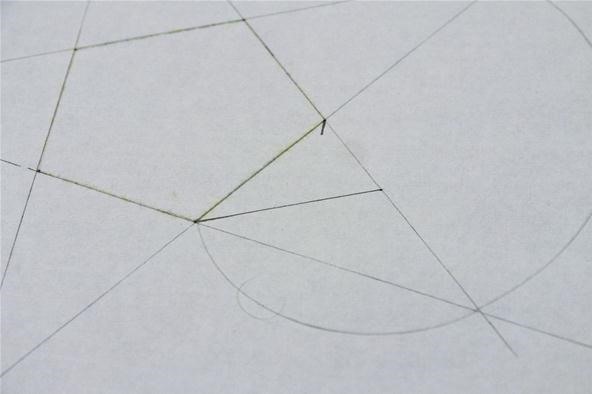 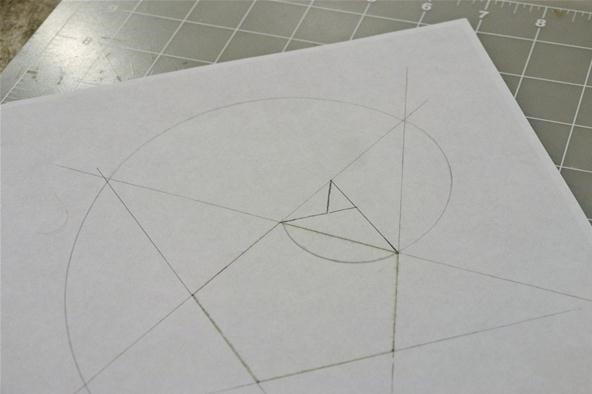 Place your compass at the intersection point of the new triangle and the old triangle. Extend the compass so that it connects to the end of the last section of the spiral. Swing an arc to the next point on the big triangle.

Step 12 Repeat Until You Can't Go Any Further

Pretty soon you will have a spiral that is too small to use your compass for.  At this point, I would just eyeball the next couple of sections. The resulting spiral can be used for many things. Perhaps you could make a nice work of art based on the Nautilus. 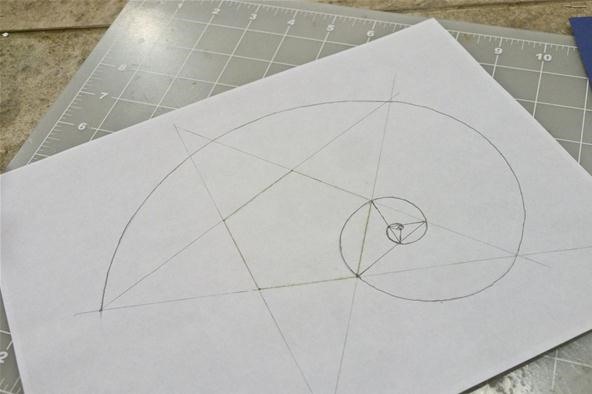 Cool- are you still going to do weekly contests?

Thanks. As to the contests, I'm not sure. I haven't come up with a good idea for a contest or what the prizes would be. Suggestions? You could comment here...or post something up in the forum and maybe get some other responses. Did you ever take some pictures of your penny polyhedra?

I made the cube and the pyramid, the pyramid fell apart. I'll make it again and upload the cube. When I make more I'll upload them one at a time :) As for the contest, your prizes could be creations you have made, books, ect. For contests, you can have ones where you get a good idea and comment on a topic, or a creativity contest where you upload a picture. Good luck :)

I''ll be mulling it over. I just want to make sure that if I do a contest that there are enough people that compete, and that the contest makes sense.