It's Monday, and once again it's time to highlight some of the community submissions posted to the Math Craft corkboard.  In addition, I thought we'd take a look at having fun with the geometrical properties of polygons and circles by using one of the best circles I know, the penny.

Cerek Tunca posted up a picture of a cube made from 6 pennies that was based off of the Math Craft banner.  He soldered the pennies together at the 12 points that would form the edges of the cube.  I've built a couple of these and they're quite difficult to make.  Impressive Job!  Is it still a fair binary decision maker?  Does it have 3 heads and 3 tails?  Hopefully, Cerek will let us know. 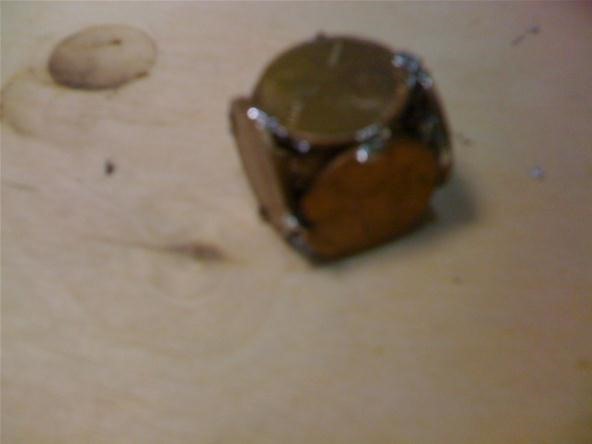 I posted up a couple of pictures which I think are worth looking at.  The first is a picture of a pie that is made in the shape of a Venn Diagram.  It is a strawberry lattice topped pie and a blueberry crumble topped pie and their intersection.  This article has a tiny bit more detail. Behold the Venn Piagram! 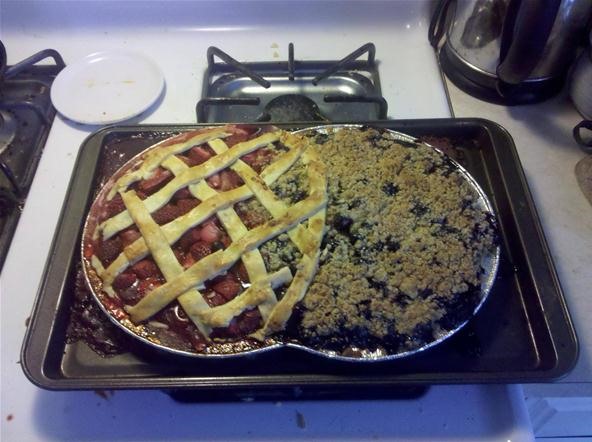 The second picture I posted up was about an art installation using fractal objects and mirrors which would extend the fractal.  It is an exhibit that you can actually walk around in and experience a fractal reality.  The main fractal is based off the Menger sponge.  For more information on the exhibit as well as several  and a video check out this article. 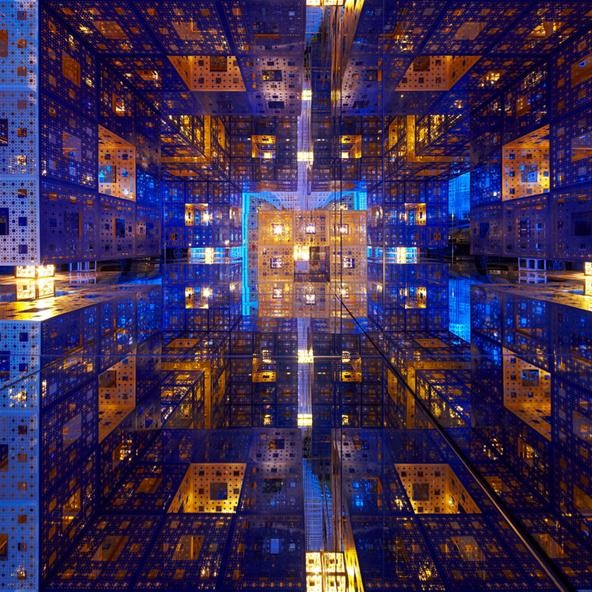 That's it for the corkboard this week.  I'd love to have much more to share next week.  If you create any mathematical art, complete any of the projects on the math craft blog or have an article or picture you found that you want to share, please post it up.  We'd love to see it!

Cerek's picture of the penny cube reminded me of all of the cool things you can do with the lowly penny.  It is a great object to build things with because it's relatively cheap, almost perfectly circular, and it's shiny!  Other coins are great, but it can get expensive to build larger objects from them.  For now, I thought we'd look at some of the two dimensional objects that you can make from coins.

A circle can represent any regular polygon since it has an infinite number of rotational symmetries.  This means it can be used in place of regular polygons in the construction of objects.  One way that it can replace them is that you can have the penny represent the inscribed circle, which is the largest circle that can fit entirely in a polygon.

In the Euclidean plane, there are 3 regular tesselations of the plane.  These are patterns that involve only one regular polygon and can repeat until they fill up as large of a space as you want.  They involve the equilateral triangle, the square, and the regular hexagon.

You can easily make these from pennies though they aren't too exiting.  In the first you can see either triangles or hexagons, and in the second you should see squares. 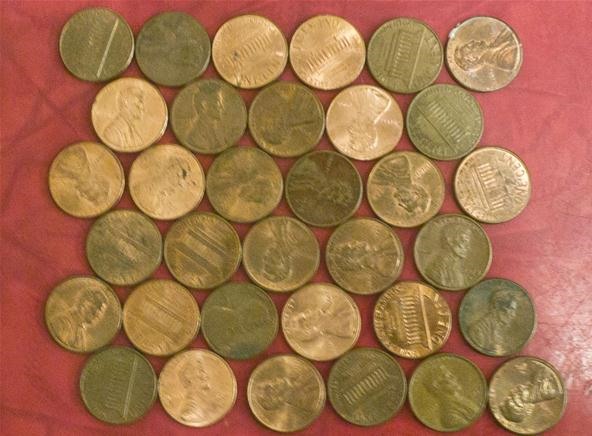 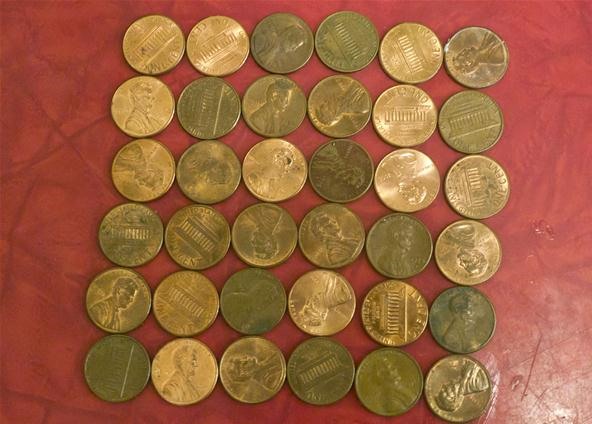 While these are not that interesting, it is nice how easy it is to make regular triangles, squares, and hexagons.  We can use that property to make some cool objects.  Since one of the corkboard posts was about the Menger sponge, let's take a look at the two dimensional analog, the Sierpinski carpet which is built entirely out of squares.

To build this object first take 8 pennies and arrange them in a 3 by 3 square grid with the center removed. 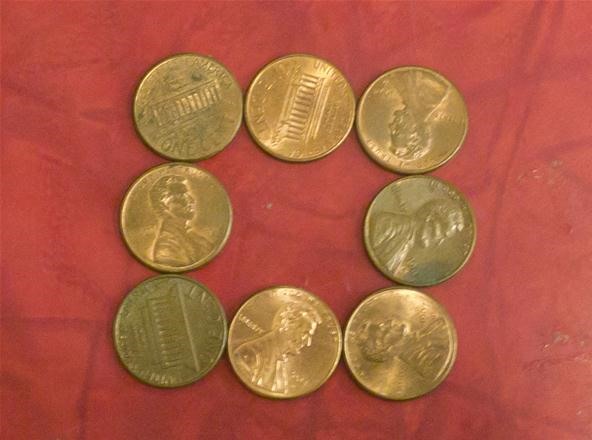 Next build a similar 3 by 3 square grid of these with the center one removed. 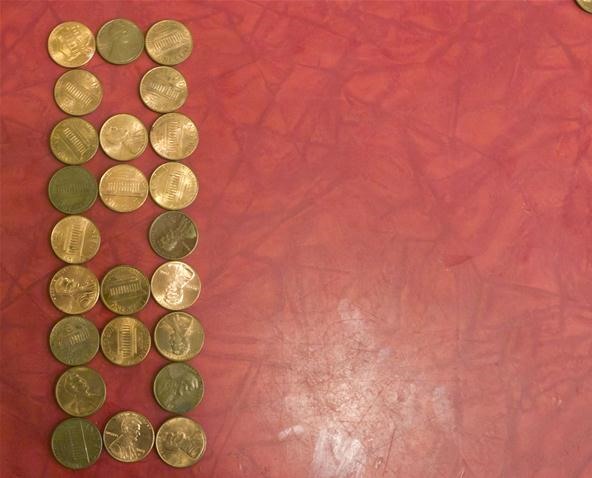 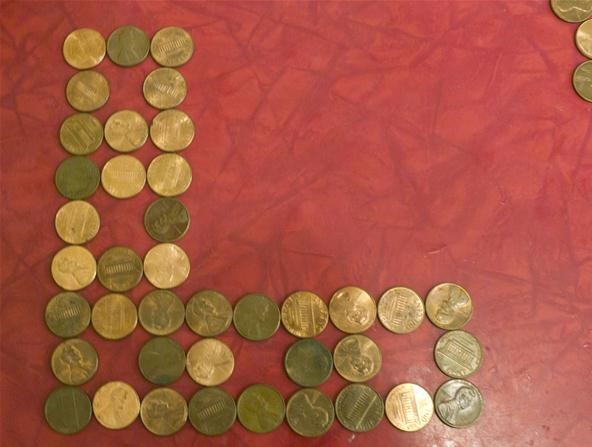 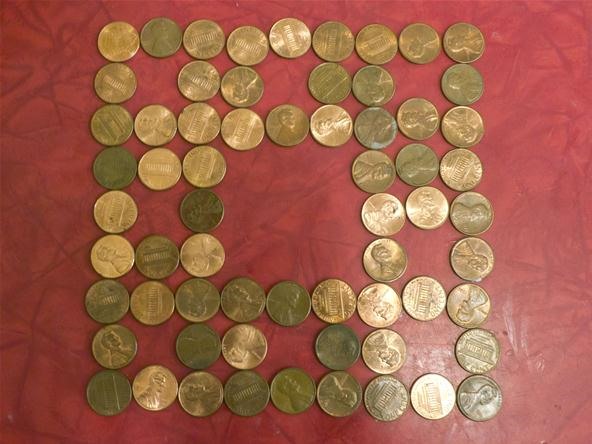 The next step would be to repeat by making a 3 by 3 square grid with these objects with the center one removed.  I didn't have enough pennies!  Also when you are building large fractal objects it works a lot better if you have a bunch of people helping you.

Sierpinski also has a fractal based off of an equilateral triangle that is named after him.  Since it is easy to build these triangles out of pennies it will be possible to construct the Sierpinski triangle as well.

To build this object, first take three pennies and place them as close together as possible. They will form a triangle. 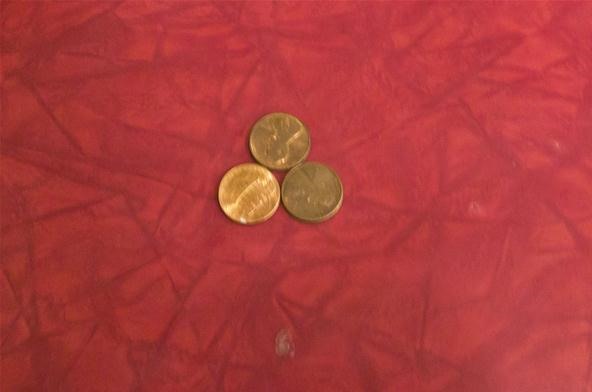 Next form an equilateral triangle with a hole in the middle using two more of these. 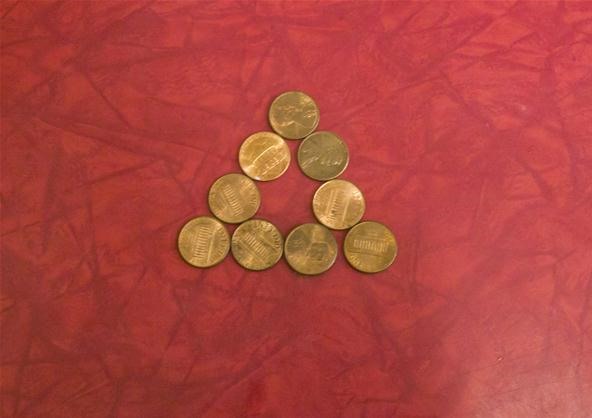 Now form an equilateral triangle with a hole in the middle using two more of these. 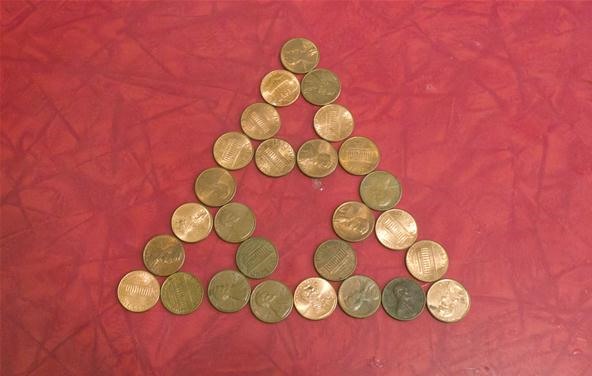 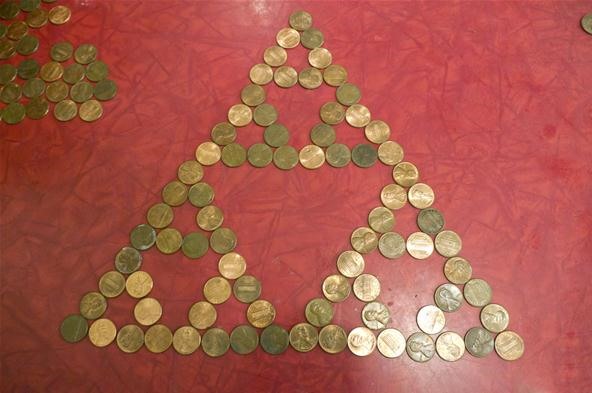 Another fractal that can be made using equilateral triangles is the Koch snowflake.  This one is a little more difficult to make because you can't really make it by starting with a unit and making larger units out of that unit.  You have to start with the biggest part and work your way down to the details.

First build a 13 penny on a side equilateral triangle.  (Photoshopped because I didn't take a picture of it.) 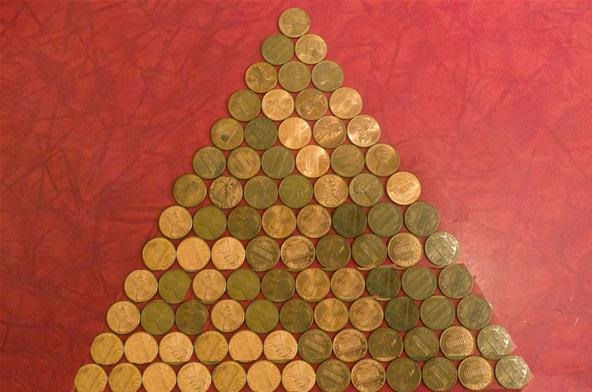 Next place three 4 penny to a side equilateral triangles on each of the sides in the middle of that side. 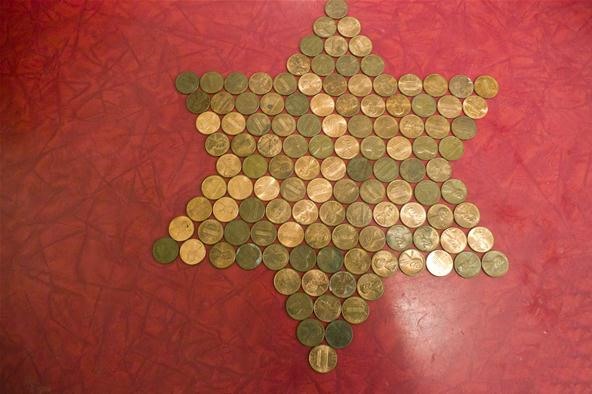 Finally, place one penny on the middle of each side of the six 4 penny to a side equilateral triangles that have been formed. 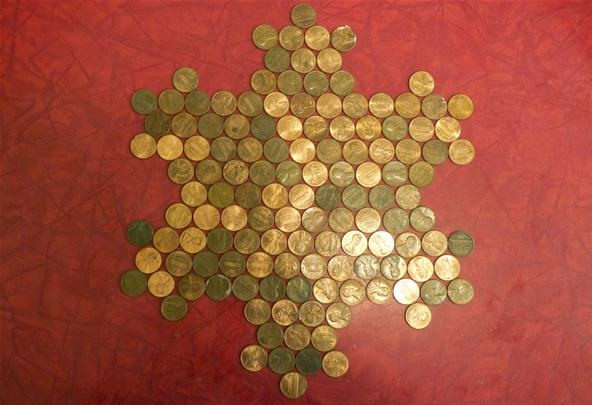 I think the next size up that would work for this fractal would start at building a 40 penny to a side equilateral triangle.

Get some friends together and have them donate and help build a larger one.  Then keep the money of course.  :)

Next post, we're going to carve some polyhedral pumpkins.