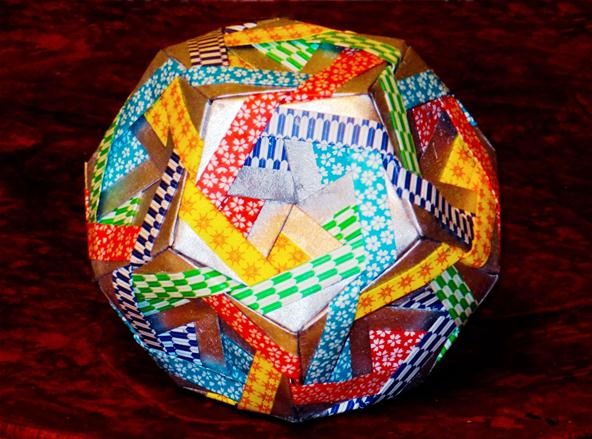 I built it using "cheap" patterned origami paper (150 cm so I could use Imatfaal's measurements) from Michael's.  I then took some silver metallic leafing paint and painted the exposed white parts with some overlap before putting the object together.  I must admit that I am not an origami purist.  I did not cut the slits.  I assembled the dodecahedron and then applied glue to each of the 30 vertices where the pentagons come together.  It is now a very solid model, with the unintended consequence of letting the centers of the pentagons be pushed into the model which I think looks really cool.  You can see that a little bit better in this video.

I also used the coloring scheme suggested in the post.  One thing that I found out that is cool about this scheme is that it actually ends up making the colors form a dodecahedrally distorted version of the 5 intersecting tetrahedra, with each color making up one of the tetrahedra.  This is really cool and so this is probably my favorite origami model now.  Thanks Imatfaal!

Awesome!! It's great to see it as a video, to experience the dimensionality. the patterns look wild. would be an amazing ornament... tho pretty big.

I really liked how it turned out. You could make it using smaller paper if you scaled the dimensions properly.

how long did it take to make?

I spent my time on this one. I think the long part of the process for me was silver leafing the white parts. To fold the 30 units, I probably took 2 hours since I was trying to be pretty precise. The assembly probably took me 30 minutes or so because it kept trying to fall apart. That's why Imatfaal has the slit cutting so that there is more of a lock between the pieces.

Cory could you do a quick how to on silver leafing? I have never seen it done before like that

I probably could. It's really easy. The stuff I use applies just like paint. It isn't quite a good looking but for the time and effort I like it better.