Torus knots are beautiful knots formed by wrapping a line around a torus and tying the ends together to form a loop. The resulting knot has a star-like appearance when viewed from above. The 36 examples with the least number of crossings can be seen at the Knot Atlas's page on torus knots. 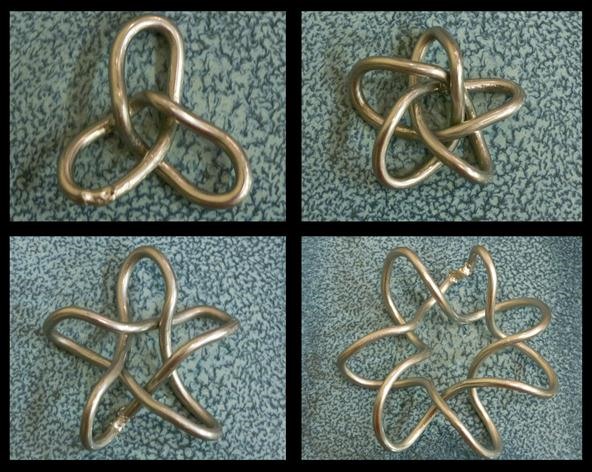 Probably the easiest way to form a torus knot is to just choose a knot at the Knot Atlas's page on torus knots. The first number describing the knot is the polygon it is based on. For instance, if it has the number 7, then it is based on a heptagon, a regular seven sided figure. The second number tells you the number of points on the polygon you move when you wrap around the torus once in the short dimension. The two numbers must not share a common factor or else it would have to be formed from multiple links. This is why there are no 6,x torus knots.

Look at the knot carefully and perhaps even print out or draw the polygon the figure is based off of. Cut the wire to length making sure to leave it longer than you need, since it is hard to add length if you need it. Form the torus knot, trim to length, and connect the two ends together. Move the lobes around until you form it into a pleasing shape.

Here's a couple of pictures showing the process with a 7,2 knot made from copper wire with solder twisted around it.

Make a couple of loops: 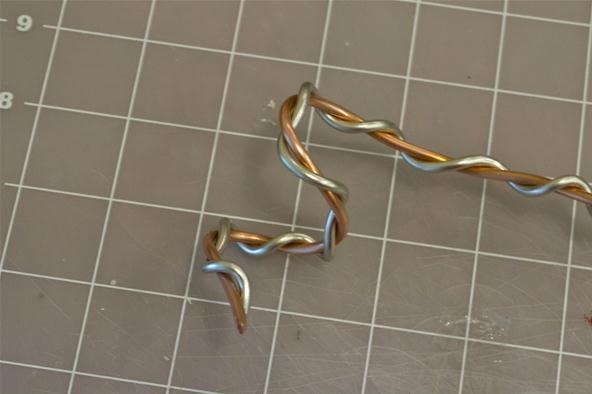 Form them into the first pass around the long dimension of your torus knot: 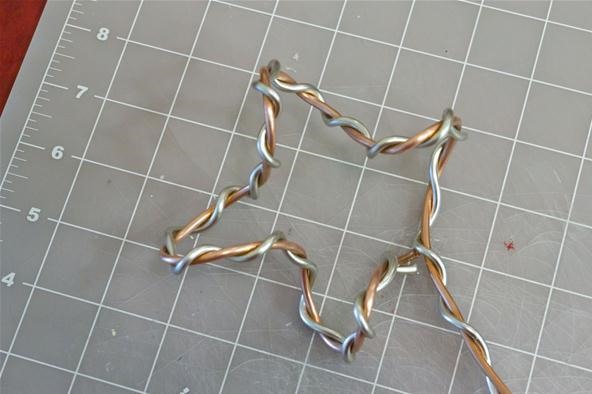 On the next passes, the wire has to be wrapped through the previous ones. You can use them as a guide. Just imagine that it does exactly what the wire ahead of it does only 1 point sooner. 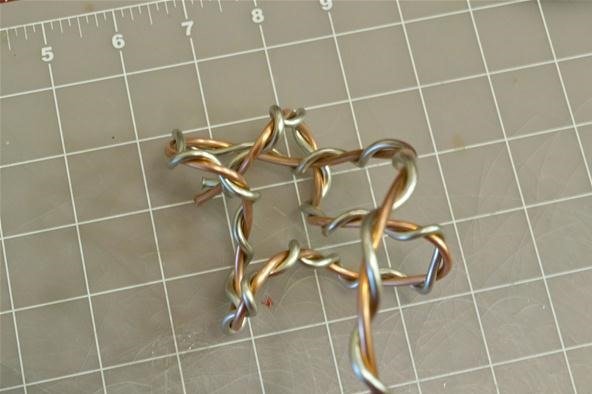 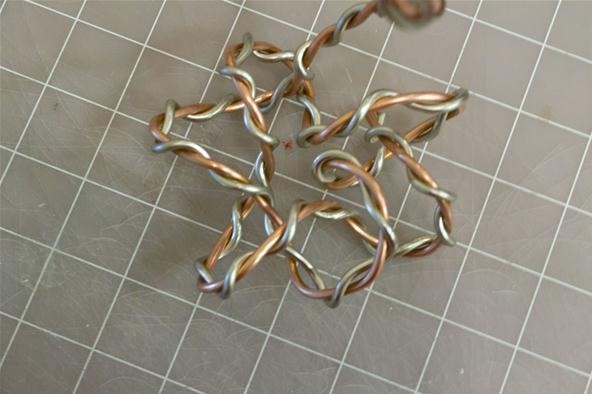 The knot is finished. Just have to cut the excess wire. 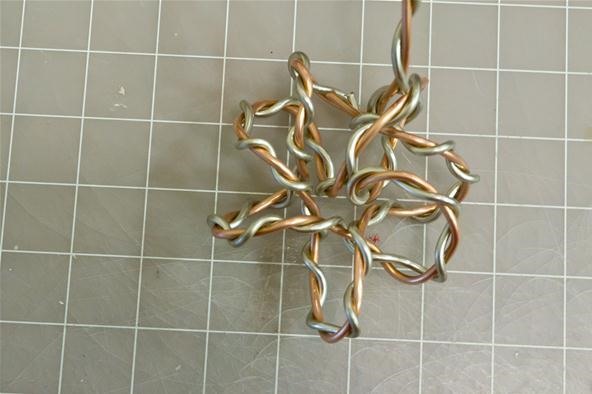 After making it a little more symmetrical, here's the finished knot: 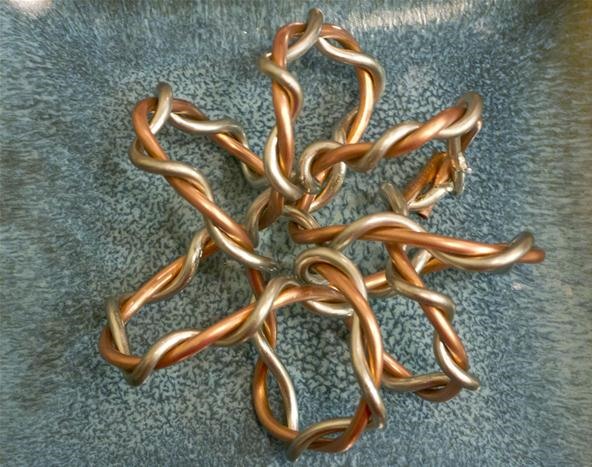 When forming the knots by eye, it can be difficult to place the wire correctly and involves quite a bit of trial and error. A template can help with this and make the process faster. There is a major catch, though. The only way to remove the template is to cut it. I imagine that there are lots of possible ways to make a template. One idea I had was to buy a styrofoam torus at a craft store and dissolve the template by dipping it in gasoline. I think that this would work, but I just ended up making a template out of paper and cutting it into pieces to remove it.

Here's a few pictures showing the process of making a 9,4 torus knot with a template: 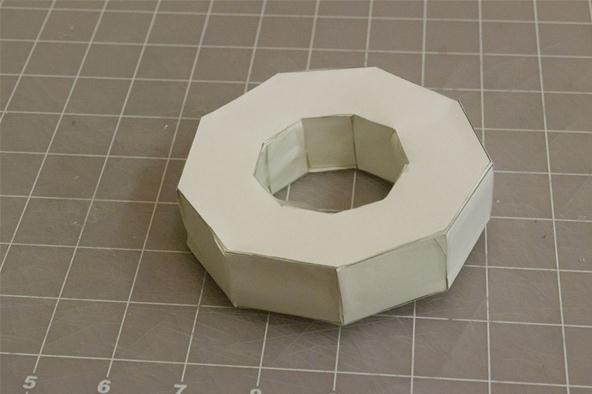 One end is taped to the template and the first few coils have been made forming the first pass around the torus. This knot will take 4 passes to complete. 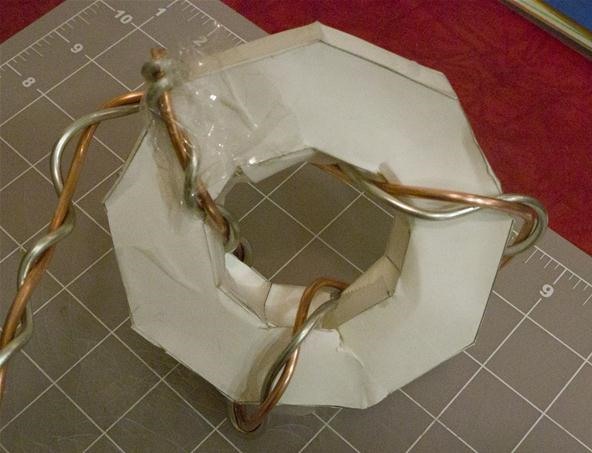 More passes around the torus: 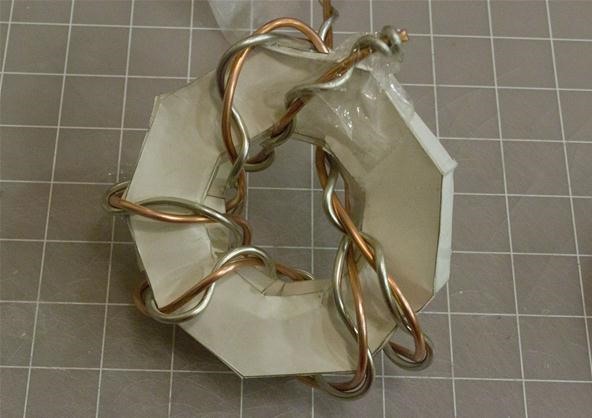 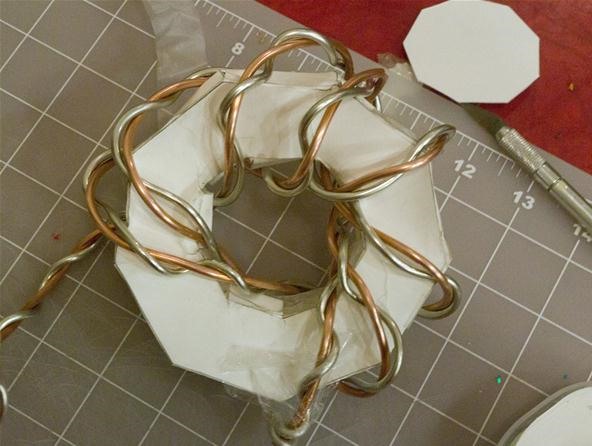 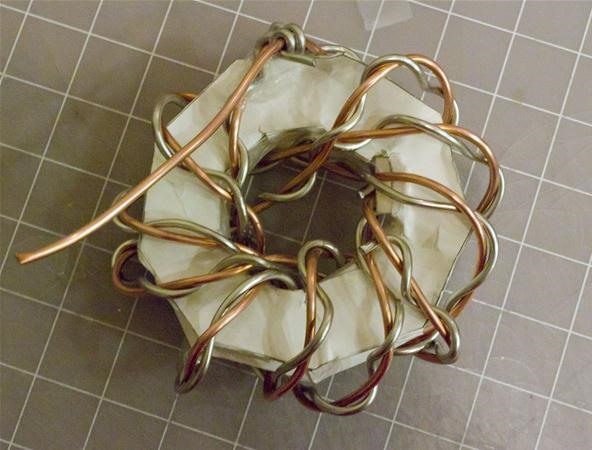 After cutting the excess wire and joining the ends by wrapping them around each other and removing the template, here's the finished product: 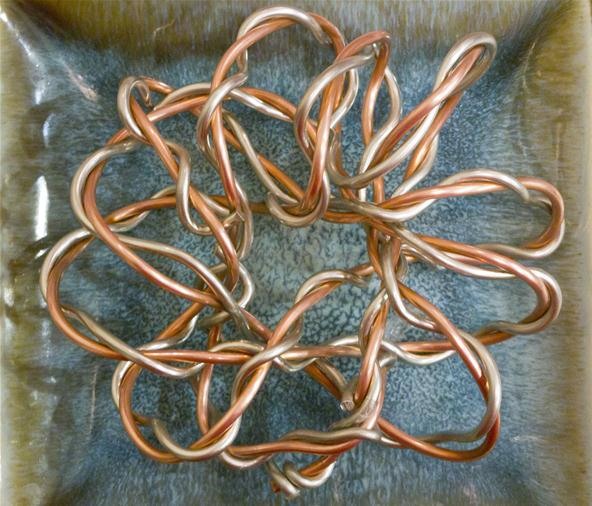 Show Off Your Knots

If you build any of torus knots, let us know by posting a picture or video up on the corkboard. If you have any ideas of how to make these better or faster, be sure to comment. If you would like a copy of the template for making the 9,4 knot, send me a message onsite. I haven't had the chance to make it more user friendly yet, but I would if someone wants it.

Where do you get the metals?

I buy them at the local hardware store. Ace is the place in my case. But any of the big box home improvement stores like Lowes or Home Depot should have them also. The copper tubing is usually in a pipe or plumbing section. The solder should be near soldering equipment which would probably be in a tools section.