It's another Monday, which means once again, it's time to highlight some of the recent community submissions posted to the Math Craft corkboard. Additionally, I thought we'd take a look at the Mobius Strip.

Rachel Mansur of Giveaway Tuesdays posted twice to the corkboard. The first post showed a sequence of knot sculptures from artist Meghan Forsyth. One of the images was of a T(5,3) torus knot, which was featured in our post on making torus knots. 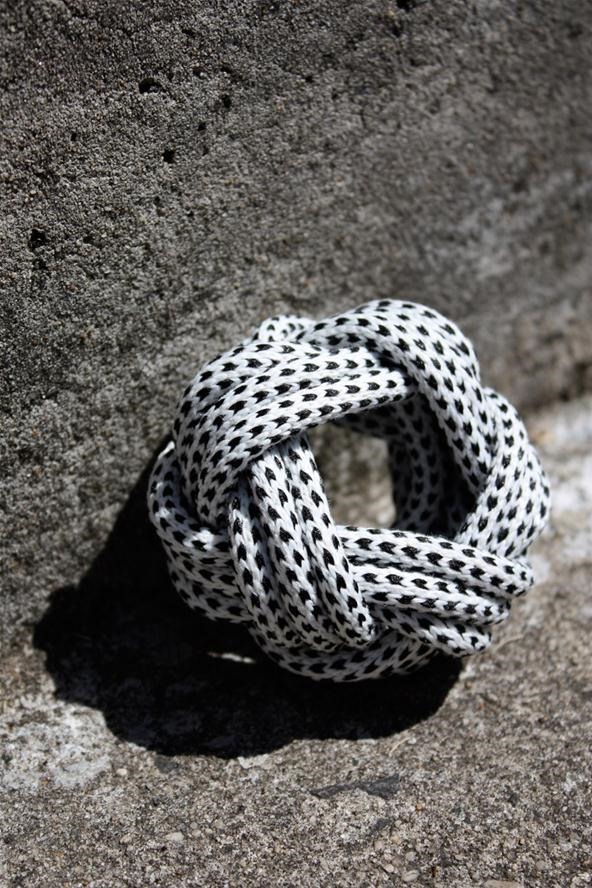 Rachel's second post was a link to a slideshow from Scientific American titled "The Unreasonable Beauty of Mathematics."  It shows a great chart of Mathematical Knots and Links. This chart could be useful if you choose to make a knot sculpture. 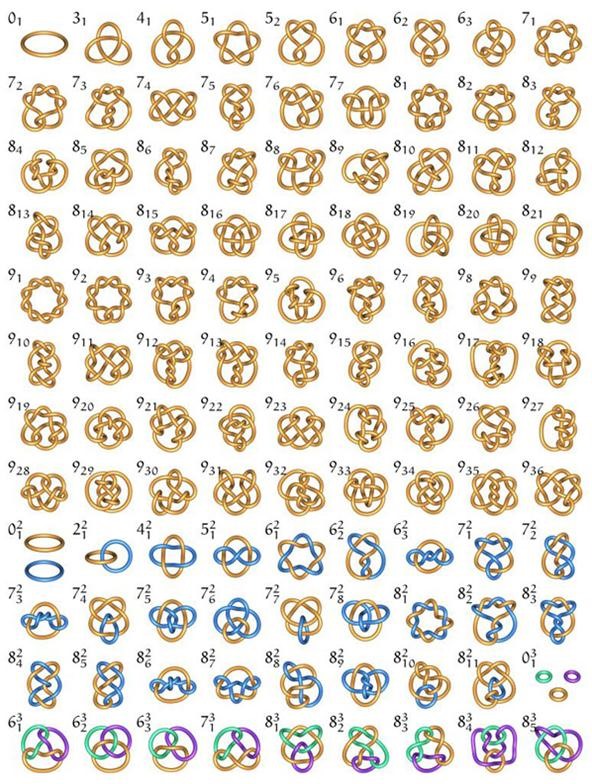 The slideshow has 8 great pictures of mathematical beauty, including the following picture of a Trefoil knot as a Mobius strip built out of puzzle pieces produced by Tom Longtin. 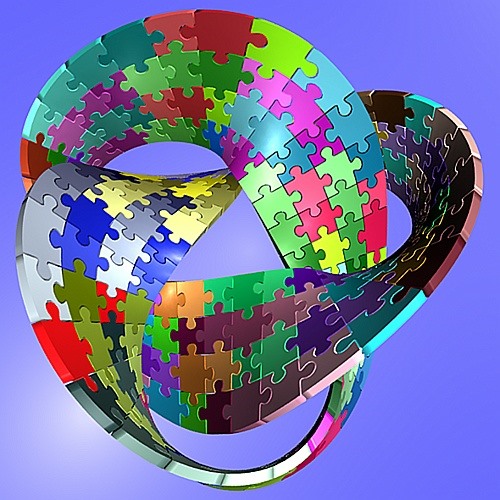 This slide made me think of all of the fun properties of a Mobius Strip and its fascinating connections to the trefoil knot and the other torus knots. I think it would be worth taking a few minutes and a piece of paper to create some Mobius strips and explore their properties. Even if you've played with a Mobius strip before, you should at least scroll down through these activites because it's likely you haven't seen everything here.

Take one piece of paper: 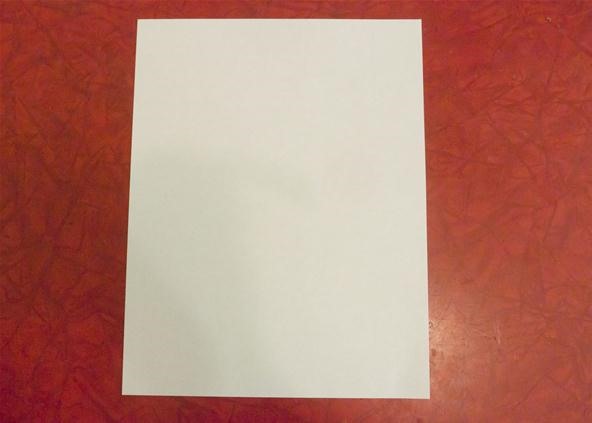 Fold in half lengthwise: 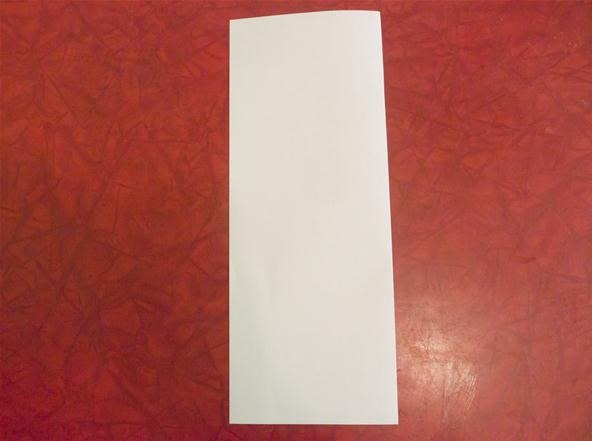 Fold in half lengthwise again: 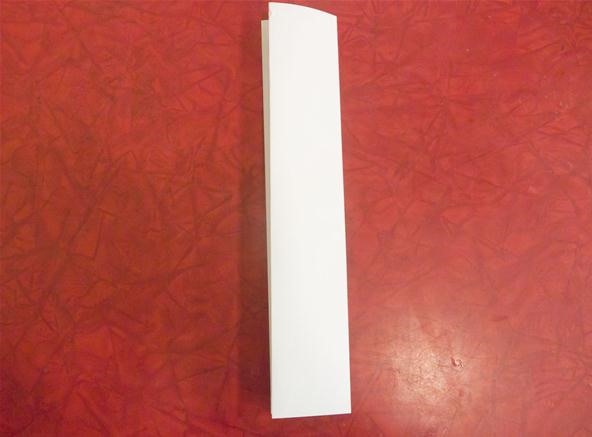 Cut into 8 strips using the folds as guidelines. If you build all of the Mobius strips below you will use all 8 pieces. 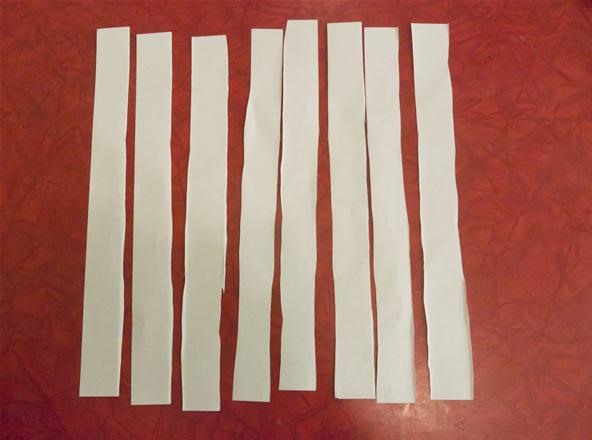 Take one of the strips of paper and give it one half of one twist and tape the ends together. 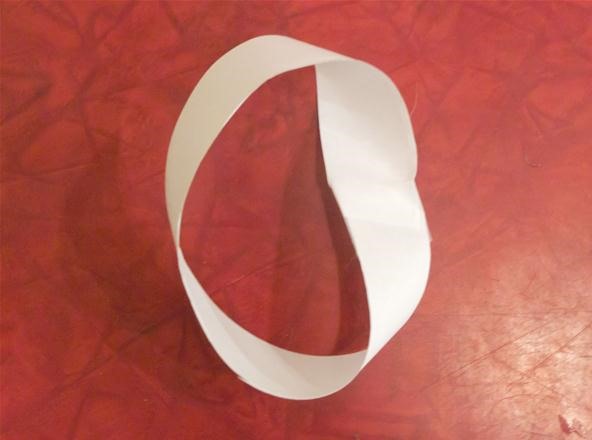 You can show a Mobius strip has only one side by taking a pencil and mark down the midline. One line will be all it takes to cover the entire strip. Amazingly, it is a one-sided object. 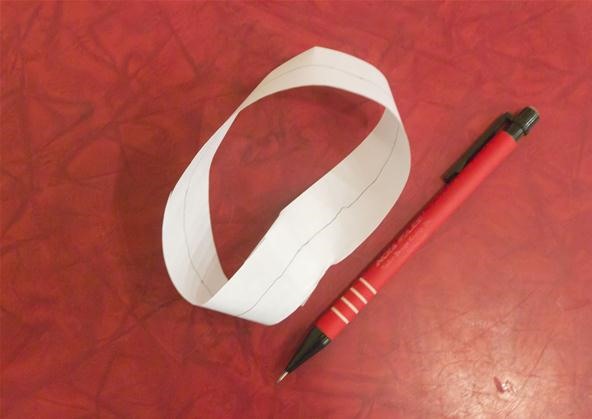 An interesting result occurs when you cut a half-twist Mobius strip down the midline. It remains one piece. It now has two full twists in it. 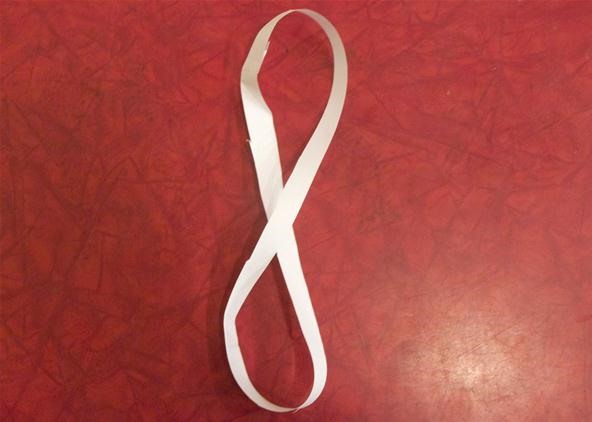 This object is not a Mobius strip, but it also has interesting properties. Take one of the strips of paper created above and give it a full twist before taping the ends together. It should look fairly curled. 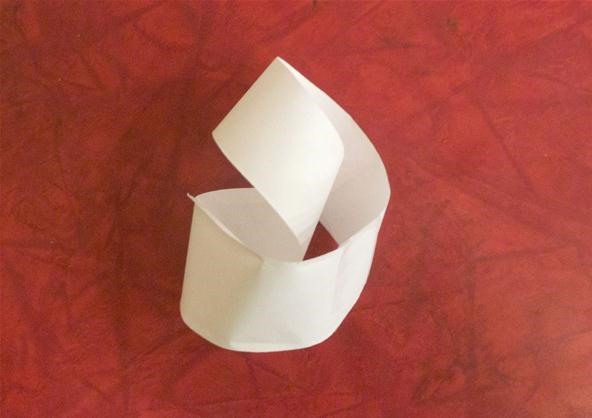 This object is two-sided, but an interesting result can still be seen if you cut down the midline. It becomes two interlocked loops. 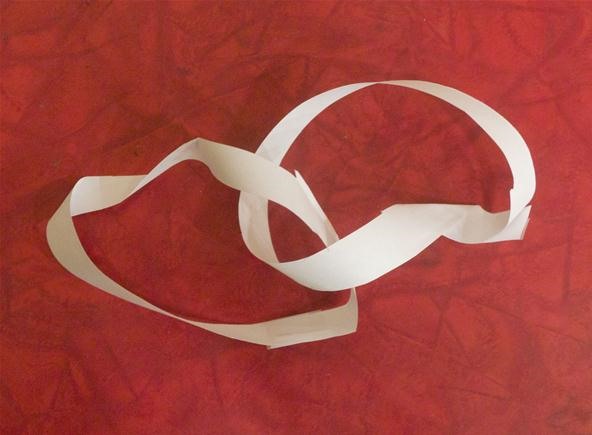 For any odd number of half twists, the strip will only have one side. To make the three half twist strips, I like to tape two of the strips of paper together and then give the end three half twists before taping it to the other end. You can do this with one strip, but it will be harder to cut. It should look like an eight or infinity symbol when you're done. 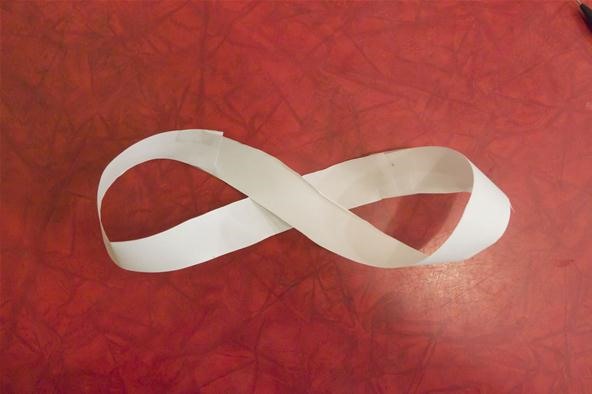 If you cut this strip down the midline, you will have created a trefoil knot. You might have to move the strips of paper quite a bit to see the pattern. The strip also has 4 full twists in it. 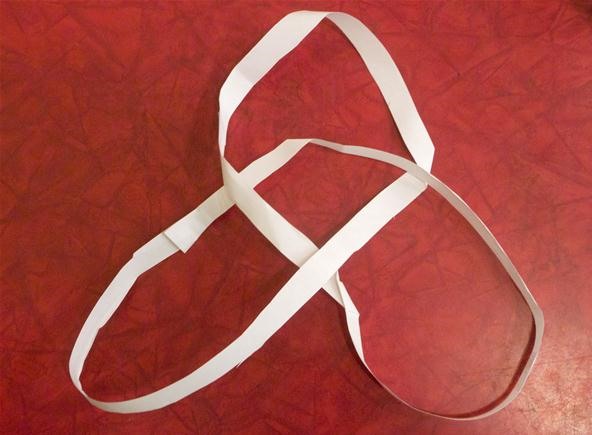 To make the five half twist strip, I like to tape two of the strips of paper together and then give the end five half twists before taping it to the other end  You can do this with one strip, but it will be harder to cut. It should look like the picture below. 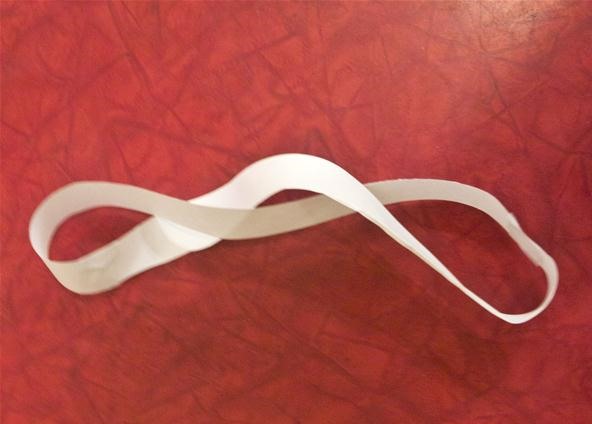 If you cut this strip down the midline you get a T(5,2) torus knot. It's hard to arrange the knot so you see all of the lobes. I still don't think I have it right in the picture below. 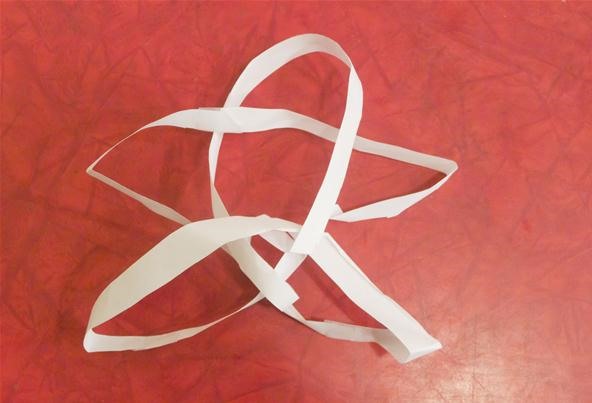 I've never tried it before, but if you did this with a seven half twist knot you should obtain a T(7,2) torus knot if you cut down the midline.

If you build two Mobius strips and connect and cut them in the right way, you can arrange the result to look like two interlinked hearts. This idea is from the recreational math blog 360. Here is the original post. 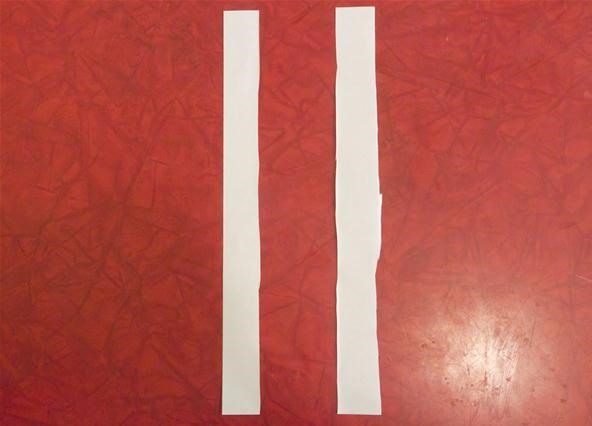 Make two half twist mobius bands. The trick is that they must twist the opposite way from each other. Twist one right and the other left before you tape the ends together. 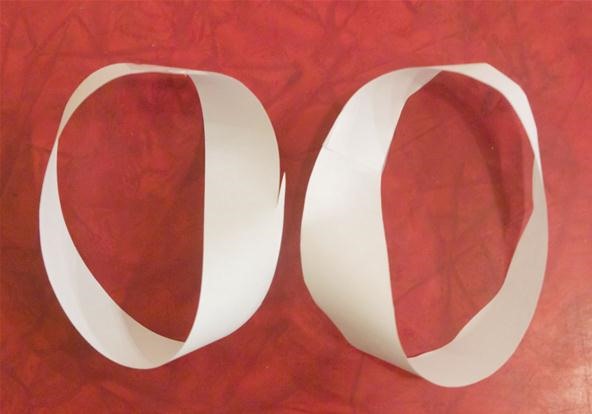 Attach one band so that the bands are at right angles to one another, with one above and one below. 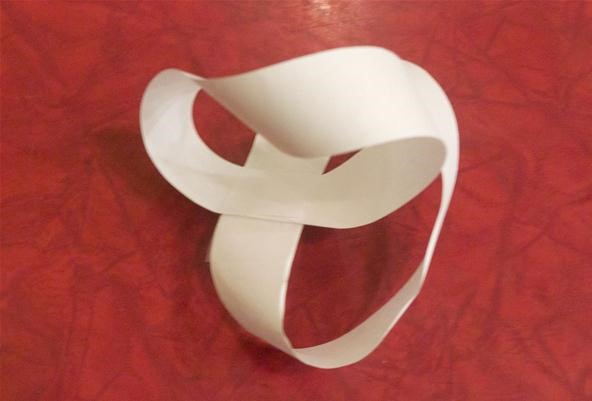 Cut through the midline of one of the strips. 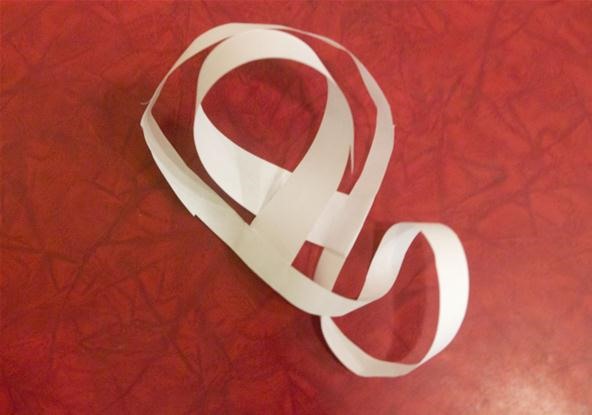 Now cut through the midline of the other. By arranging the strips you can make them look like this: 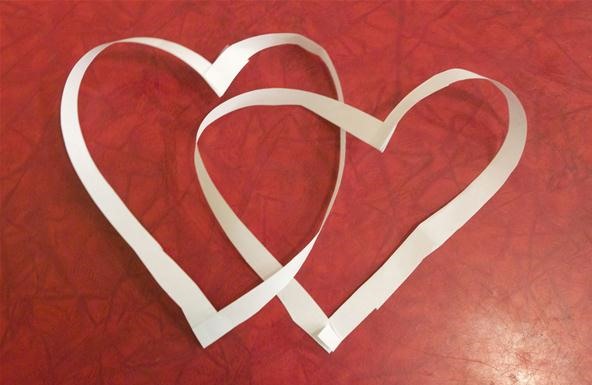 All of these Mobius strips are very quick to make and are really fun to share with your friends.  If they've never seen a Mobius strip, they will probably be quite surprised.

If you complete any of the Math Craft projects, please share with us by posting to the corkboard. Maybe you just have something cool that you made or saw on the web—you can share that, too!

Next post, we're going to create some curved figures using only straight lines.